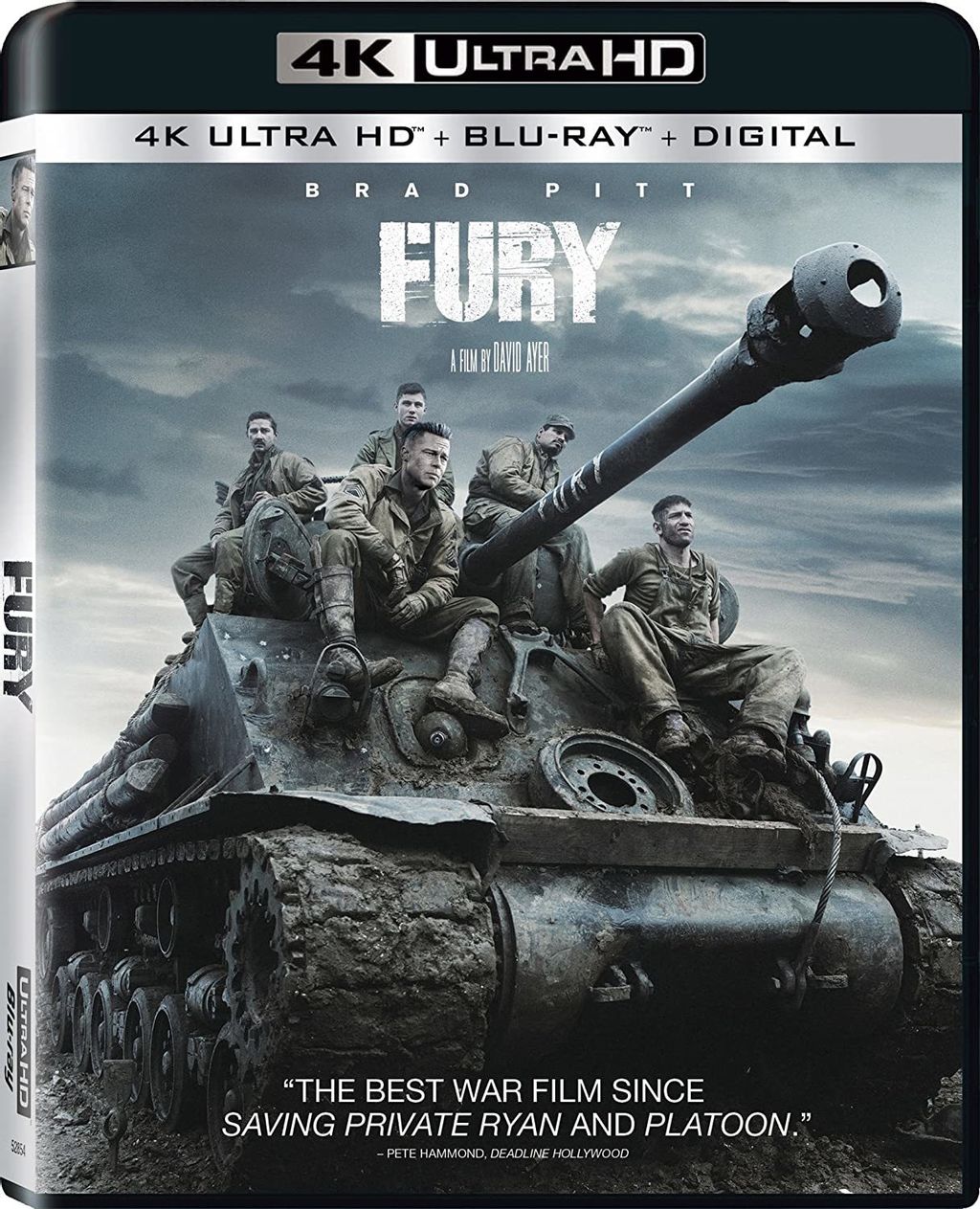 Fury's UHD does not see the movie make a substantial jump in picture quality from Blu-ray, in large part because the Blu-ray is already quite strong, but the benefits the 2160p format brings to the film are certainly welcome. Grain is very well resolved in 4K, reinforcing the film's cinematic texturing with a complimentary, even structure. Details are quite good. The biggest improvements come in close-up where scars, scruff, clothes, armor, tank treads, gun barrels, mud -- most anything that comes close to the camera, in focus -- enjoy an add to overall clarity and sharpness. Inside the belly of the tank is a treasure trove of visual complexities but not much opportunity for any of it to shine under the constraints of a fairly dark grayscale surface area, dotted by sepia photographs, war trophies, blood, grime, instruments, and other opportunities to break up the monotony that do so but without substantial definition. Still, a comparison to the Blu-ray in any scene -- in the tank or out of it, day or night -- reveals much firmer definition. That translates to the HDR-10 color presentation as well. The movie has been darkened a bit, accentuating the cold dread and dead world and dying humanity that's a constant throughout the film, if not visually then certainly emotionally and tonally. The movie is bleak, and even skin textures and beige military uniforms, which are still well saturated but toned down from the Blu-ray, cannot fully offset the unwelcoming bleakness that so expertly conveys the horrors of war. Fire is substantially bright and more uniformly intense than it is on the Blu-ray, and tracer fire illuminates the screen with remarkably bright streaks. Black levels waver a bit between paleness, firmness, and mild crush, but overall this is a very satisfying presentation, solid in its textural upgrade and a little more pronounced in its color boost, which further desaturates the movie but at the same time adds a significant depth to the palette.

Fury's impressive DTS-HD Master Audio 5.1 lossless soundtrack has been eclipsed by a superior Dolby Atmos presentation. The track's seamless ability to immerse the listener into the sounds of war is the entirety of its purpose, be that intensive action, distant fighting, or chatter amongst the men. The far-distant pops, cracks, and thuds of varying intensity and volume dot most every scene. The sonic reminders of war are essentially ever-present in some capacity, and the Atmos' ability to add layers of precision only enhance the movie's atmosphere of dread, decay, destruction, and deterioration. The surrounds and top end more than capably carry the distant, hellish sounds, but it's of course the more prominent effects that carry the movie's track and lift it firmly above the Blu-ray. Strong overhead engagement is often a component, but even as it's prominent, it's never artificial. Planes zoom overhead in the 23 minute mark with excellent stage traversal and weight.

The first major battle in the film is a frighteningly intense sequence in which American tanks and troops cross a field towards a tree line where German infantry and artillery await. Shells zoom through the air with an astonishing sense of speed and weight, whistling through the stage and above the listener as they miss their targets or, in one of the most dazzling sonic moments ever heard in film, safely ricochets off a tank. Shells that hit their targets result in enormous low end output. The sense of scale, the power of the shells, the strength of the machine guns, the chaos of war are amazingly recreated; the listener will feel as if he or she is in the tank or on the field, always engaged within the movie by way of sounds that yield proper positioning and high level intensity. Additional battle scenes are just as sonically rewarding and emotionally draining. The accuracy, intensity, and immersion are all first-class attributes. Music enjoys proper stage width, depth, and clarity. Dialogue is always well defined and prioritized, from shouted commands to chatter through the tank's communication system. This is an absolutely stellar Atmos mix.