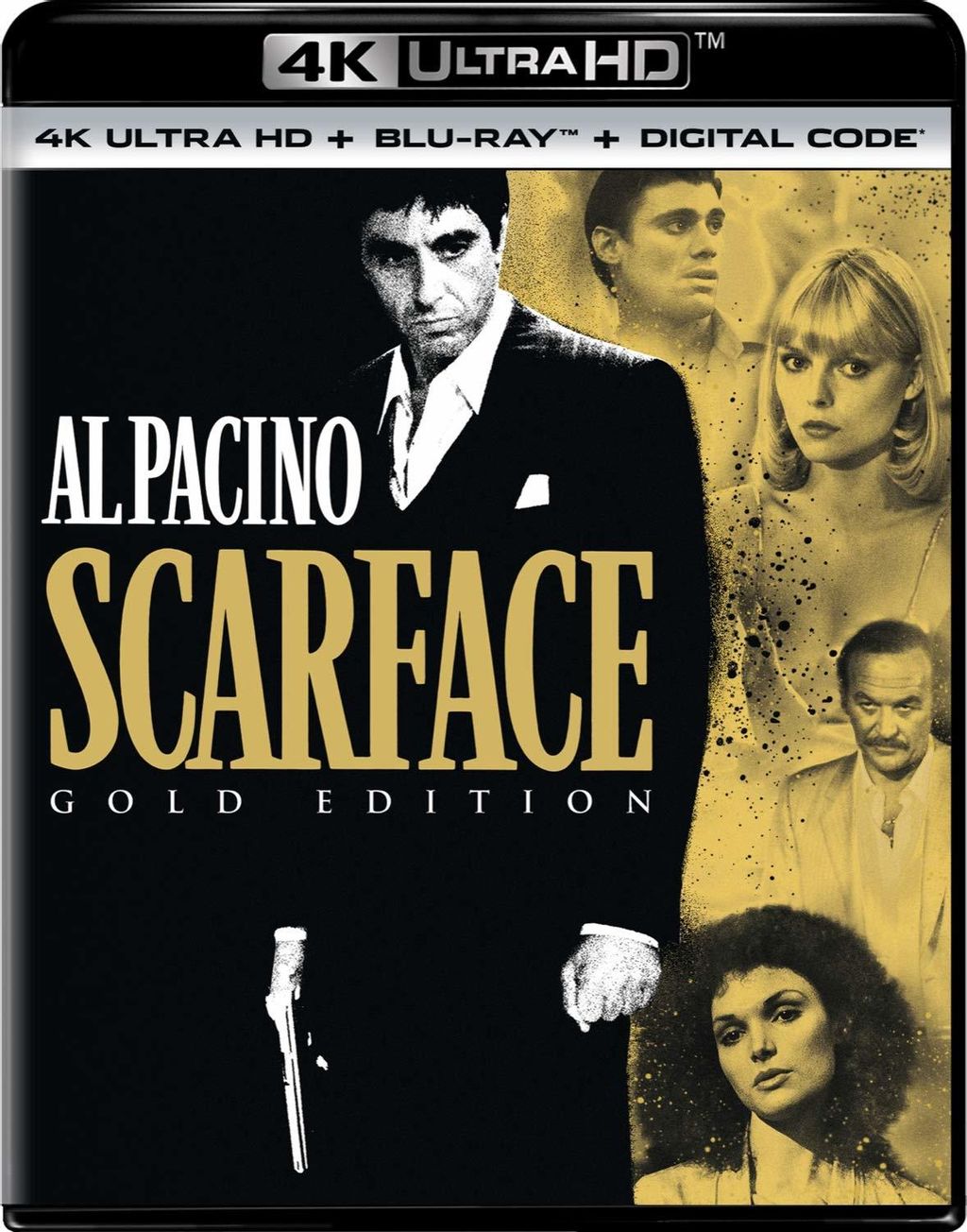 Scarface immigrates to the UHD format with a stellar 2160p/HDR presentation. Universal's efforts bear much fruit, presenting the film with a razor-sharp, naturally filmic, and beautifully colored viewing experience that far exceeds either the previously issued VC-1 Blu-ray or the remastered 1080p disc. The picture maintains an organic grain structure; some may find it slightly dense but it's very handsome and complimentary to this review's eyes. Textural efficiency is high. The picture boasts exceptional detail and clarity both in close-up and in medium distance shots. Whether dense and grungy urban areas or high dollar and high class homes and clubs, the picture reveals every component with incredible sharpness that only expands one's appreciation of the film and further draws audiences into Tony's blood-soaked world. Facial textures are precise up close and the period clothes reveal stitching and fabrics with screen-commanding ease. This is a greatly reinforced image that finds stability and accuracy well beyond any previously released home video version.

The HDR color spectrum is a major add that further enhances one's viewing experience. Colors are deeper and more accurate, more intense but never overbearing, forced, or phony. Reds find greatly improved saturation and color punch. Whites -- beginning with the text crawl at film's start and moving forward to other on-screen text and crisp white shirts -- enjoy far greater brilliance than even the remastered Blu-ray can provide. Some of the nicest examples of HDR's strengths come by way of bright neon signs around Miami; beautifully blue skies, pools, and ocean waters; and one of the most relaxing examples can be seen in a dusk sky in chapter 12, home to beautiful purples and oranges. Flesh tones appear more stable and true. Black level depth is terrific, fixing the biggest flaw on both the VC-1 and remastered Blu-rays. The picture struggles with no major source of encode flaws, though a few shots do exhibit some softer and smudgier elements which are inherent to the original photography. This is a striking UHD image that is far and away the best Scarface has ever looked for home consumption and is likely to be the standard-bearer for quite some time.

Note that the "Video" score above references the remastered Blu-ray and not the original 2011 VC-1 release.

Scarface's new DTS:X Master Audio soundtrack is a terrific bit of audio engineering. The track is full bodied and boasts excellent dynamics and detail. The period music is exceptionally well versed in seamless stage delivery. Instrument clarity is phenomenal and lyrics are stellar, right from the beginning where the opening music is amazingly vibrant, full of life and defined by superb clarity to the infectious 80s beats. Surrounds are not shortchanged, with pop tunes and score both finding balanced rear engagement. There is also an appropriate level of low end support. City street ambience is wonderfully immersive, with full, detailed sound during the riot scene in chapter three, which also features discrete helicopter sounds engaging the top layer for a more realistic effect. Revving chainsaws, gunfire, and the like are alive with terrifying vitality and fury. Dialogue is pure and commands the front-center position of the stage with lifelike and perfectly prioritized operation.