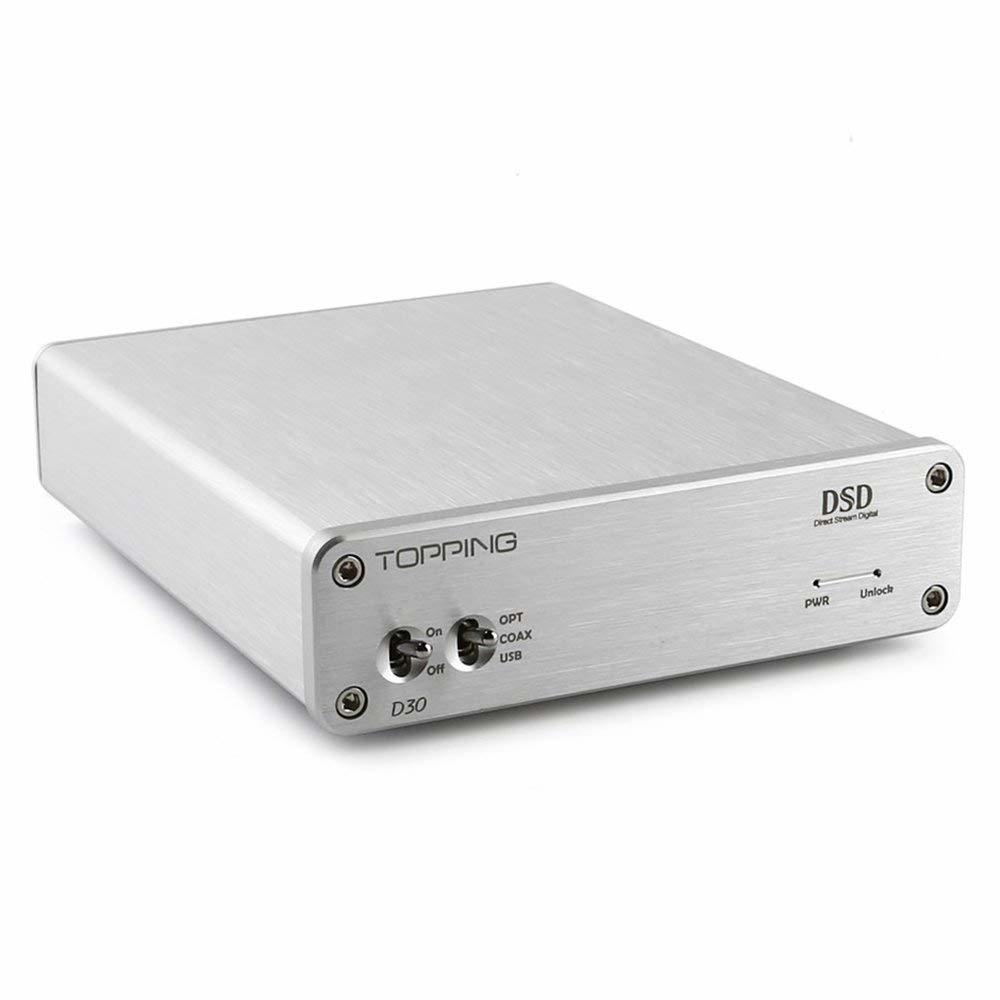 This is a hardware teardown and analysis of Topping D30 USB DAC. No doubt many of you have read my review of the D30 and know that it is my current favorite for a budget DAC ($129). There seems to be two revisions of this DAC out there so this will outline the unit I tested.

Four hex screws releases the back panel allowing the board to easily slide out without much adventure: 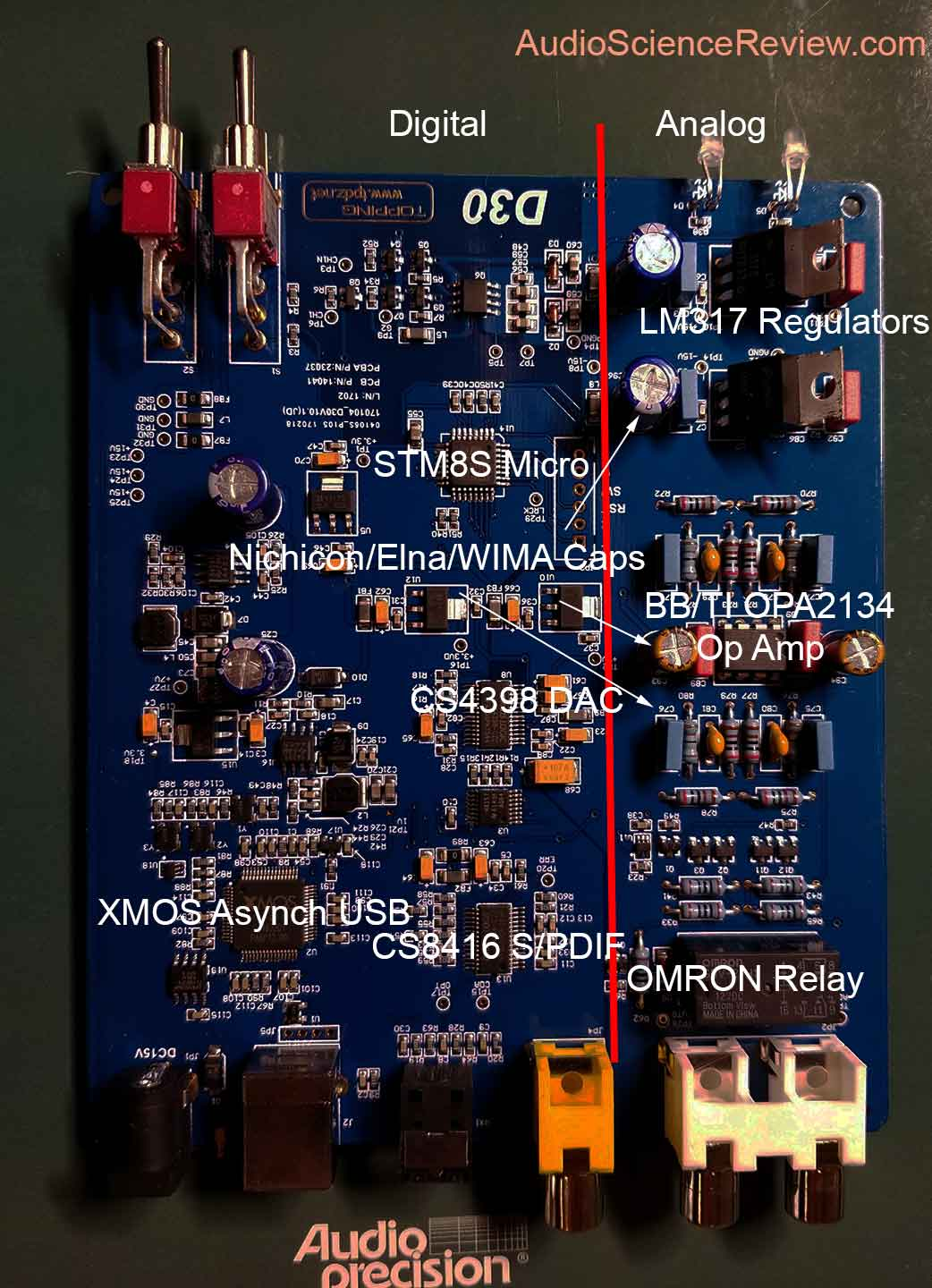 The board is clean with no modifications, soldering issues or any problems visible. No, you don't want to "eat of it" but for a value-oriented product, I see nothing wrong with it. Here is the revision of the board by the way:

This larger than normal budget DAC board sizes affords very good separation between the digital and analog side. Connectors are nicely spaced out which should reduce crosstalk. On top of that, there is a nice "moat" between the two sides as seen here: 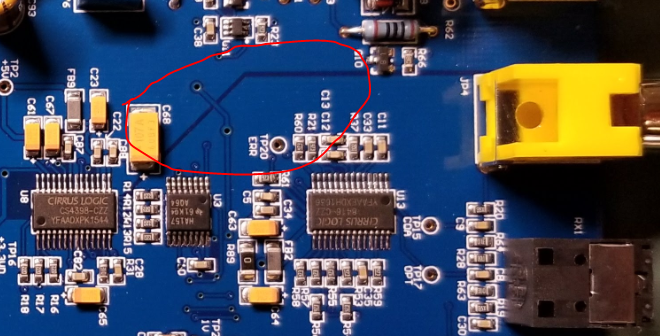 That goes through the entire board as I have roughly shown in the overview picture above. Certainly a nice design practice to keep digital noise from bleeding into analog section (one of the biggest challenges in DACs). The only miss on this front is a front panel switch that selects between digital sources. So signals have to be routed way up there and back. This switch would have been best put in the back. I guess convenience trumped that engineering fidelity.

Back to overall picture, the ubiquitous Xmos async interface chip is used to fetch digital data from USB and convert that to raw PCM data to play by the Cirrus Logic CS4398 DAC to play. Companion CS8416 is used to interface with the S/PDIF coax and optical inputs. 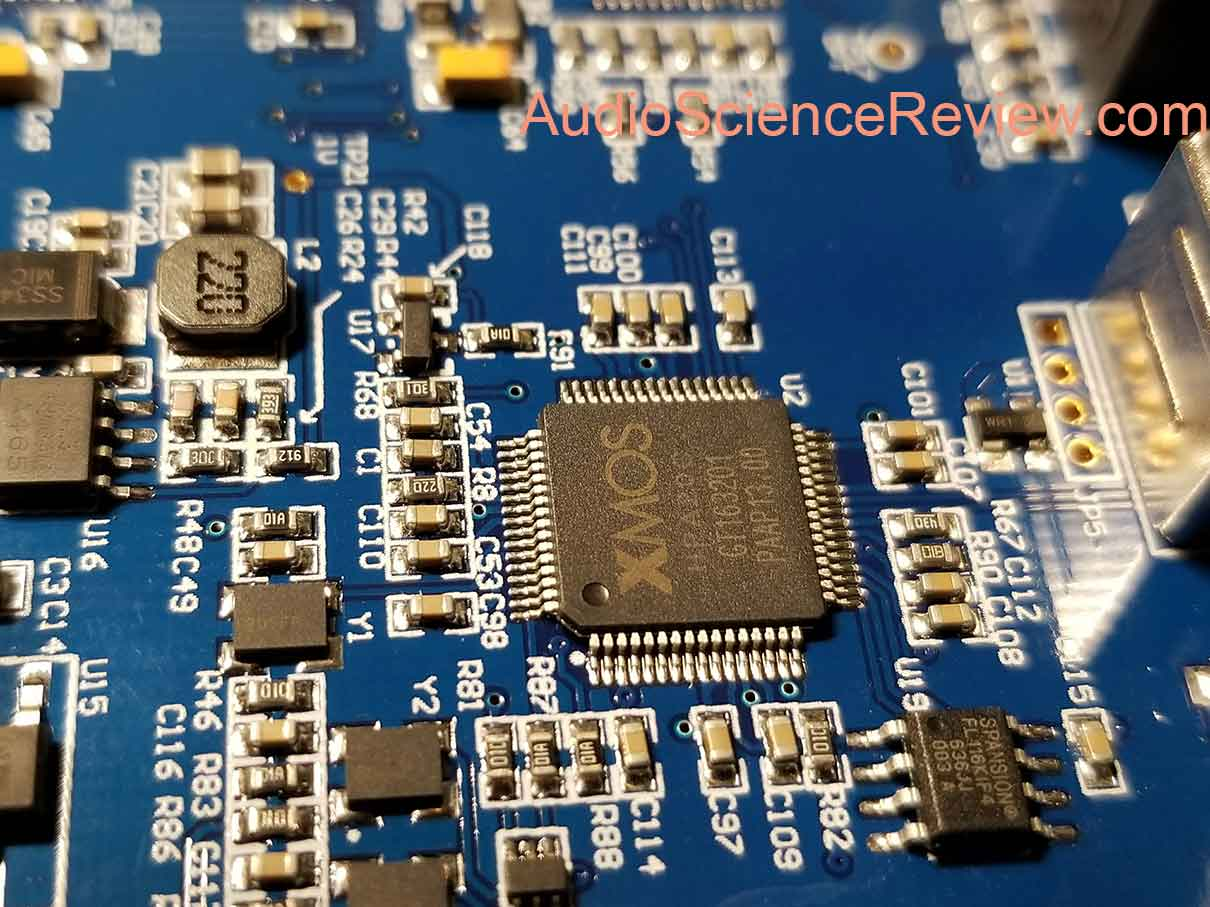 Was pleasantly surprised by use of high-end brand capacitors from likes of Nichicon/Elna/Wima.

In similar vein, use of Omron Japanese relays (but made in China in this instance) is also reassuring.

That theme continued in an impressive manner with tons, and I mean tons, of test point for proper automated testing of the units: 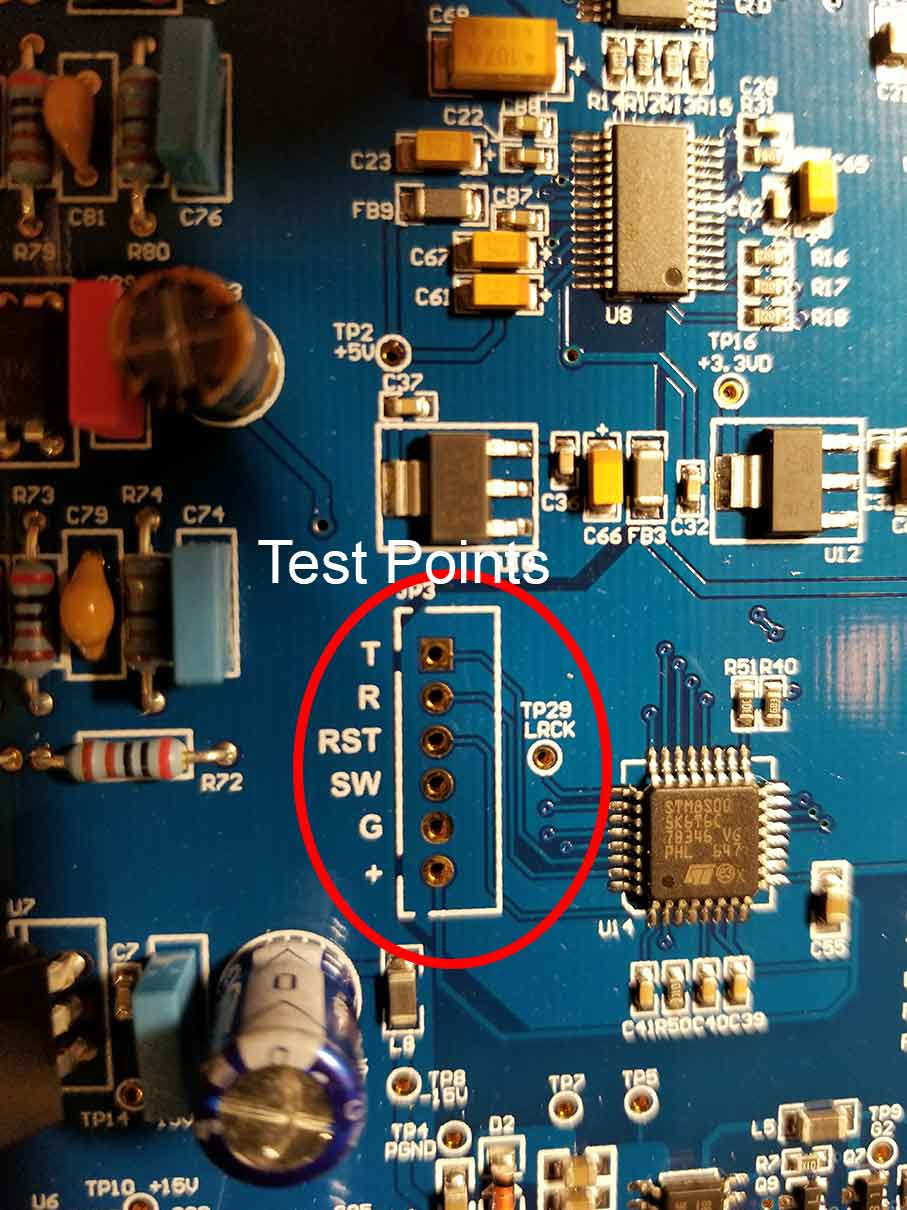 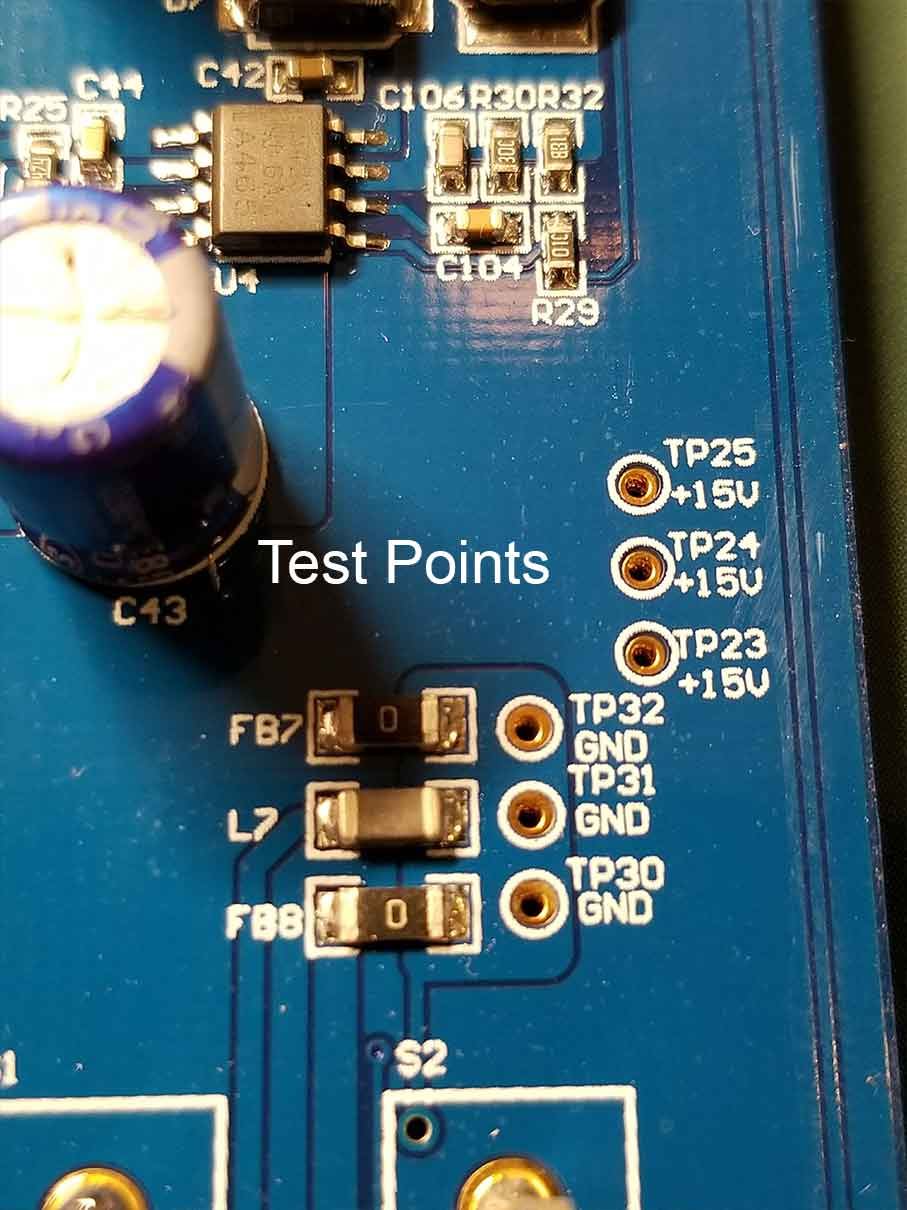 Not that you would want to repair this type of product but if you did, these would come in very handy. Kudos on this! I don't see this much attention to testing in even higher-end products.

This gets us to the backside of the PCB: Nothing too exciting really. The connectors in the back are hand soldered and there is some flux residue there. No solder balls or any other disasters as I for example found on the Schiit Modi 2 Teardown.

Notice how all the test points are brought to the bottom side through gold plated "vias" allowing a bed of nails type of jig to probe them for pass fail testing.

Unlike the rust used parts elsewhere, I was also happy to see some of the beefiest switches on a small product like this: You could probably pull Sal's car with those heavy duty lugs!!! These are not going anywhere.

Only minor nit is the "hot snot" used to stabilize the board. This only works once of course. Now that I have pulled it out, it won't remelt itself. Still, it was good to see it there as it gets rid of the looseness and cheep feeling other products without this can have.

The Topping D30, just like its measured performance, is quite competently assembled. No revisions or flaws are apparent. Isolation is very good between digital and analog. No sign of used or counterfeit parts. Excellent attention is given to testability which translates into a unit working when you purchase it.