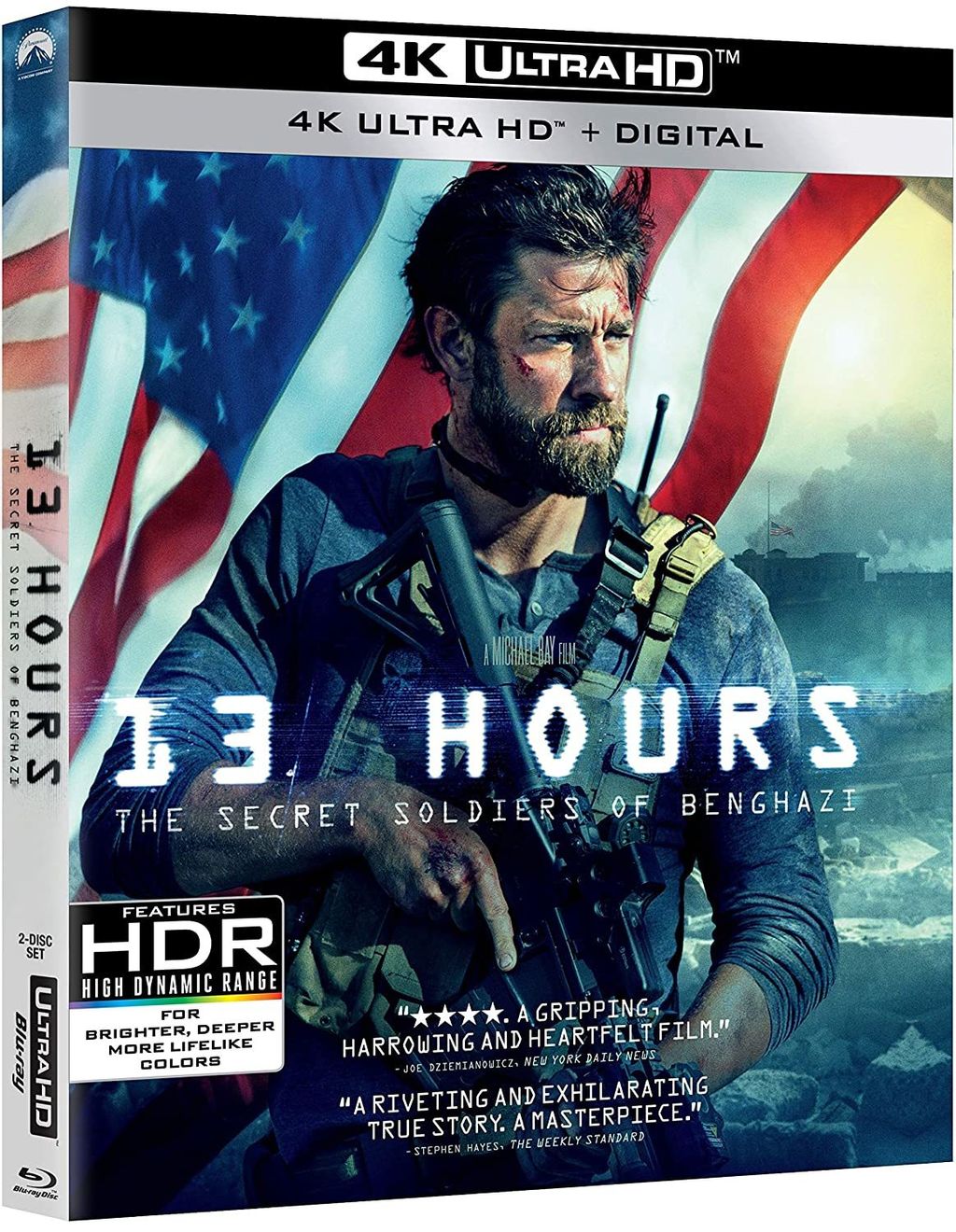 Paramount's UHD release of 13 Hours: The Secret Soldiers of Benghazi replaces a fantastic 2016 Blu-ray with a 2160p/Dolby Vision (upscaled from a 2K digital intermediate) presentation that is not an overhaul of the image but rather a complimentary upgrade to both textural clarity and color reproduction. Bay and Cinematographer Dion Beebe, working with Bay for the first time, shoot and process the film hot, utilizing high contrast and sharp textures to define the image. The Dolby Vision color palette is a major source for visual upgrades. The image certainly holds firm to the envisioned color spectrum and temperature but the adds to depth, vibrance, and stability, all working together to ensure a more thoroughly saturated palette. Warm sweaty skin tones, vibrant orange and white explosions, blazing hot fires, punchy blue daytime skies, and deep nighttime blacks are all improved for accuracy and visual oomph. Various points of illumination offer greater intensity and white balance is improved a good deal, transitioning from brightly creamy to solidly white. The movie thrives with the Dolby Vision grading; it translates the sticky, dusty world and the bloody, explosive action equally well.

The image enjoys an aggressive boost in sharpness as well. Even considering the 2K DI the movie's textures show much more solidification and grit on the format. Close-up facial features are a standout visual highlight. Sweaty skin, intricate pores, dense beards, and both civilian garb and military support elements like vests and helmets reveal fairly significant levels of boosted clarity, visible definition, and sheer complexity over the Blu-ray, good in its own right but clearly a step well below the UHD. Bay shot the film with aggressive, intimate textures in mind, and they never feel pushed too hard on UHD. The format compliments the movie's intimacy and feel for gritty modern combat. Rubble, debris, and a few gory wounds are revealed with realistic complexity and razor-sharpness. The picture shows no signs of unwanted wear and tear and the encode appears to be in perfect shape. Even though this is not a transformative experience over the Blu-ray, the image solidification both in terms of its color palette and texturing -- both good advances in the image's overall presentation -- take it to a new level of excellence.

13 Hours: The Secret Soldiers of Benghazi features an intense and exhilarating Dolby Atmos soundtrack. This review is based on playback via an 11.1 setup, adding four "height" channels to the more traditional 7.1 layout. The track is amazingly full and very finely detailed. Certainly, the action dominates. There's an almost frightening level of authenticity to the track. Gunfire tears through the stage with remarkable vigor and definition. The different sonic signatures of different weapons -- from .223 caliber M4s to larger caliber machine guns -- is evident in every battle sequence as shots ring out from all areas of the stage with a tremendous sense of presence and heft. Explosions likewise hit hard. The low end pushes very deep and heavy with a bone-rattling concussive sensation. Debris likewise scatters about with striking effectiveness, placing the listener squarely in the middle of the mayhem. Mortar rounds and rocket propelled grenades also zip and zoom through the stage. Maneuverability around the listening area, complimented by a balanced but never intrusive overhead presence, recreates the battles with amazing authenticity. Lesser, but no less important, support details also impress. Musical delivery is clear and immersive. Ambient effects are nicely positioned and integrated, whether chatter and public address announcements at an airport that seem to saturate the stage or minor exterior atmospherics that help set the stage in the movie's sonically calmer first act. Dialogue is always well prioritized, even in the heat of battle. Clarity is excellent and placement holds tight in the front-center location.