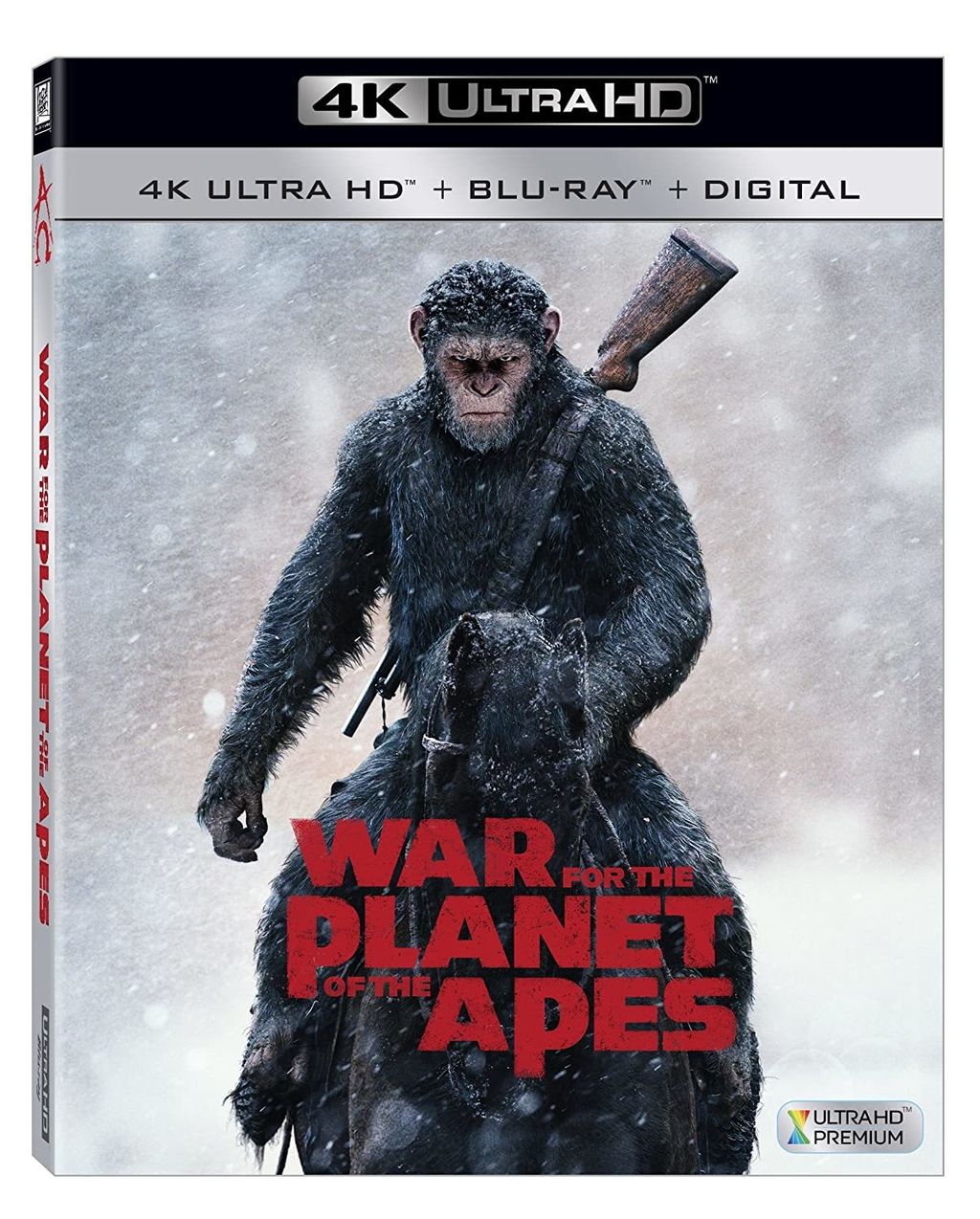 War for the Planet of the Apes 4K Ultra HD Bluray

War for the Planet of the Apes is presented on 4K UHD courtesy of 20th Century Fox Home Entertainment with a 2160p transfer in 2.40:1. This 4K UHD version shows the same kind of sometimes subtle but still noticeable uptick in detail and fine detail levels that have been seen in other outings sourced from 2K DIs. There's an increased feeling of palpability in things like the creased textures on the simians' muzzles, and even some of the dense foliage in the forest scenes. The film's unrelenting darkness also doesn't mask shadow detail quite as much in this version as in the 1080p version. Interestingly, HDR really hasn't altered the palette all that much, with the long gray and blue sequences looking more or less identical to their 1080p counterparts, albeit with arguably better suffusion. There's perhaps a greater range of tones in the teal to green ranges, both of which are exploited regularly throughout the film, but, again, really not to any overly dramatically noticeable levels. One notable exception to the palette differences (or lack thereof) is the kind of yellow "showdown" scene between Caesar and The Colonel toward the film's climax, which in the 4K UHD version is skewed slightly more toward orange. While the precision of the CGI is probably even more pronounced in the 4K UHD version, I occasionally felt like things looked slightly more artificial.

I gave top marks to War for the Planet of the Apes' standard Blu-ray audio presentation in DTS-HD Master Audio 7.1, but as with so many other "traditional" surround mixes (in either 5.1 or 7.1) which get upgraded to Dolby Atmos or DTS:X, there are noticeable and typically enjoyable if sometimes rather subtle differences. This 4K UHD disc's Dolby Atmos track instantly provides more midair information even in the sly recasting of the Fox fanfare, and there's some similarly new "hovering" to the sonics in the subtle ambient environmental effects that underlay the various production entity mastheads, but the first really impressive use of the Atmos channels comes in the opening battle scene, especially with regard to elements like some of the percussive explosions and (especially) the array of arrows that rain down on the humans. The precision of the effects, especially some of the panning effects, is quite impressive, but there's also excellent attention paid to discrete channelization (listen, for example, in that opening sequence right before the battle breaks out how the horn call kind of floats in the right channel). While the battle scenes have the most "showy" sonics, as might be expected, there are a number of other standout moments, including some of the crowd scenes in the "concentration camp". Dialogue, effects and score are all rendered flawlessly and with extremely wide dynamic range on this very enjoyable track.

Note: As tends to be the case with Fox releases, the audio and subtitle specs are different on the different formats. The specs above are for the 4K UHD disc. For the specs on the 2D Blu-ray also included in this package, please refer to the above linked review.