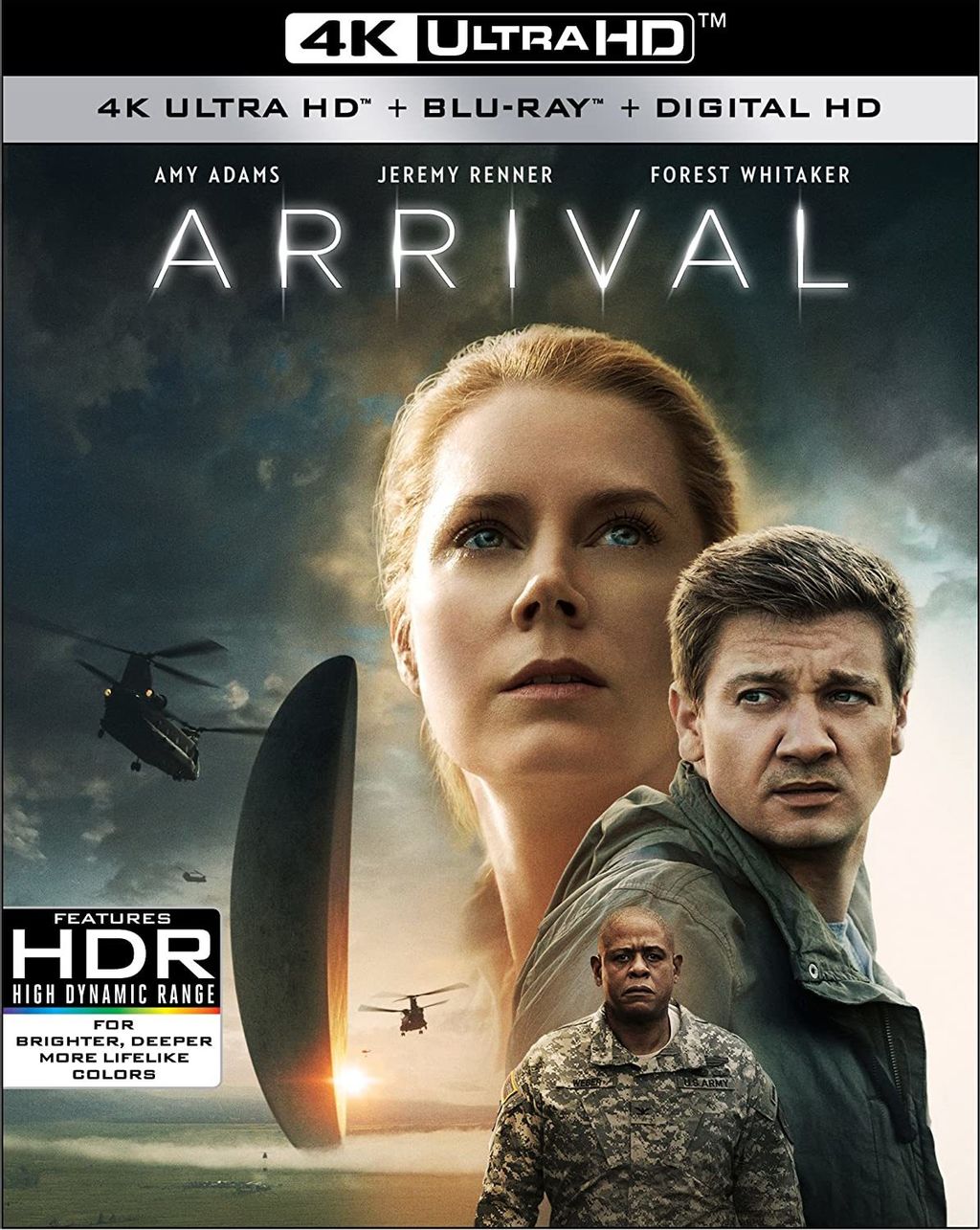 Arrival isn't a movie made for expressive visuals. As noted in the review of the 1080p Blu-ray, the movie is seriously drab, offering precious little in the way of standout color, visual depth, or frame dimension. The digital image is very flat, and all of these qualities carry over to the UHD, though there are some differences. The film retains its general appearance -- cold, devoid of significant colors -- but it is proficient in presenting its wares with a satisfactory level of detail and, within the film's parameters, colors. Of note is that the image does boast a decent sense of improved warmth. Look at a scene around the 10:50 mark that sees Louise watching the news coverage, just as Colonel Weber is arriving in her office. The UHD, with its HDR-enhanced colors, offers a greater sense of color nuance and depth, warming the flesh tones and accentuating the red hair, though without sacrificing the dark, absorbing nature of the scene. The 2160p presentation, which is reportedly an upscale from a 2K digital intermediate, offers a boost in general detailing, too. Her hair is more finely revealing, the skin is a touch more complex at medium distance, and the image is appreciably, but not significantly, sharper into the background as far as the books and as close as the clothing and chair details.

That scene is a bit dark, representative of much of the movie, but the subtle boosts are more apparent in slightly better light and contrast. Look at the 48:37 mark (the screenshot below, in fact). Ian is dressed in white, the orange hazard suit behind him, contrasted against a dark gray background. His face is significantly more complex on the UHD. It's a startling difference, really. Stubble and pores receive a fairly serious boost in definition. The skin changes from a milky, creamy color to one that has more depth, but doesn't push red or any other color. It's "fuller." The orange, too, is deeper, more richly vibrant compared to the Blu-ray, which is startlingly bland in comparison. Such qualities define the entirety of the visual experience. The added resolution lifts the transfer mildly at worst to significantly at best while colors are much more impactful but still very reserved and respectful of the movie's intended tone. Arrival is a good UHD, even upscaled. It doesn't betray the movie's bleak style and turns one that doesn't immediately stand out as one that would benefit from the format and gives it a healthy upgrade.

Arrival is curiously absent a Dolby Atmos soundtrack (even on this UHD) which, with the movie's sound structure and priorities, would have seemed only fitting and likely to enhance the experience. Nevertheless, Paramount's DTS-HD Master Audio 7.1 lossless presentation never struggles to do the movie's sonic needs justice. The opening minutes deliver a healthy, panicked, war-footing type of audio barrage. Alarms blare in the background, car horns and confusion litter the stage, and fighter jets zoom through. A helicopter powers towards the listener a few minutes later. Rotors are heavy and the sound from both outside inside are strikingly immersive. Deep, penetrating lows signal key moments that are equal parts exhilaration and fear. Bass does get a bit rattly at the very bottom, but some of the more pronounced powerings are wonderfully realized and deeply penetrating with amazing full-stage immersion. More traditionally sourced music enjoys positive spread and balanced surround detail. Dialogue is clear and well prioritized. It enjoys natural center positioning for the duration.