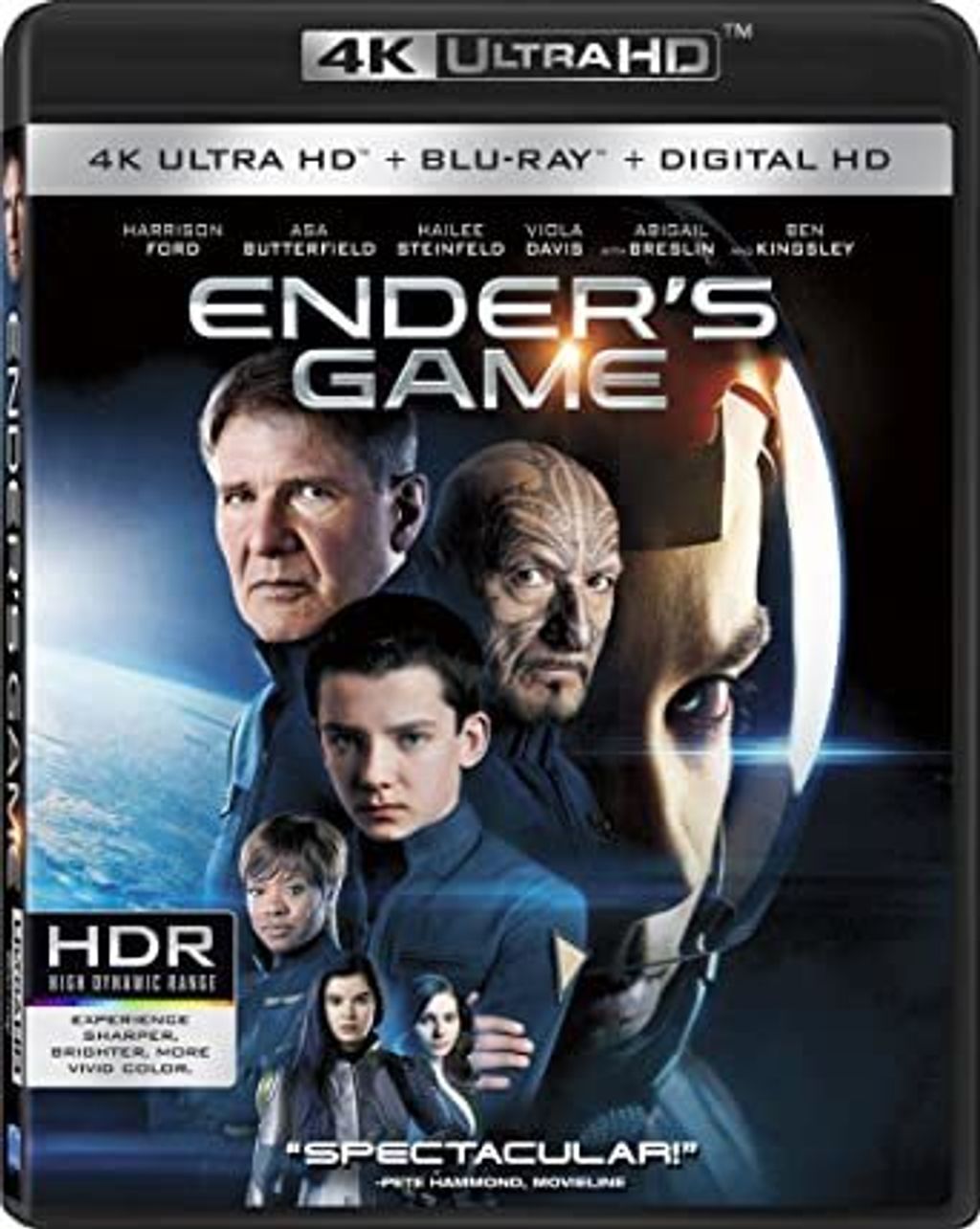 Ender's Game is presented on 4K UHD Blu-ray courtesy of Lionsgate Films with an HEVC / H.265 encoded 2160p transfer in 2.40:1. The IMDb lists this as having been captured at 5K (with Red Epic cameras) with a 2K DI, from which I assume this new 4K version was sourced. As with other 2K DI sources which have made it to 4K UHD, the jump in detail levels here is quite remarkable, and something that might seem counterintuitive given that 2K DI. This SFX (and CGI) heavy film shows the same artificiality at times that I and other reviewers have mentioned as we've begun assessing this new format, but to my eyes, perhaps less so than in other 4K UHD discs I've personally reviewed. In fact, detail levels are often quite amazing throughout the CGI elements, with individual aspects like the "swarm" released from the huge bug in the film's opening moments incrementally but still noticeably better delineated in the 4K UHD version.

The other interesting element with this version is the gradation of colors, something probably most attributable to HDR. Kind of weird colors like the yellowish suits the trainees wear have a slightly more modulated look at times now. The heavily blue color graded sequences also show better shadow definition and some outright dark scenes like the nighttime tête-à-tête between Ender (Asa Butterfield) and Graff (Harrison Ford) outside of the Wiggin home show considerably more content in the darkest areas of the frame.

And that brings us to one of the problematic aspects of this release—the black levels. While I didn't experience the odd, washed out black levels to the extent that I did with The Expendables 3 4K, there was still a somewhat milky grayness to the blacks, including the black bars masking the display frame to create the 2.40:1 aspect ratio of the film. As I discussed in our The Expendables 3 4K Blu-ray review, tweaking various settings on both the player and television allowed me to at least partially ameliorate this issue. Once again there seem to be variable experiences many early adopters of 4K UHD are experiencing with this release (as based on comments in our Forum), but I personally did not see any radical changes from scene to scene as some members are reporting. The final issue that I did see was some minor banding in some midrange gradients. It's an extremely transitory issue and one that seems to be a byproduct of the increased resolution of the CGI elements.

Rather interestingly (at least for audio geeks like yours truly), Ender's Game 4K ditches the DTS codec of the original Blu-ray release (also included in this package) in favor of Dolby audio, in this case Dolby Atmos. I believe this is the first 4K UHD release I've personally reviewed where this has been the case. While the DTS-HD Master Audio 7.1 mix on the original Blu-ray was superb, there's a whole new dimensionality to the Atmos mix which is evident right from the get go, with the "flashback" scene detailing the alien incursion. Huge panning effects clearly waft overhead now, a technique which is repeated throughout the presentation (another fantastic "overhead" moment is quite a bit later in the film, when Ender is playing his videogame and the castle collapses). The onslaught of surround activity is quite impressive throughout this audio presentation, and to my ears there's a noticeable uptick in LFE in this new version, something that provides some literally floorboard shaking moments at several key turns. Despite a somewhat FX heavy mix, dialogue is always prioritized well and the overall sound design is extremely well articulated with precision and a surprising amount of nuance (at least given the somewhat hyperbolic tendencies of the film).