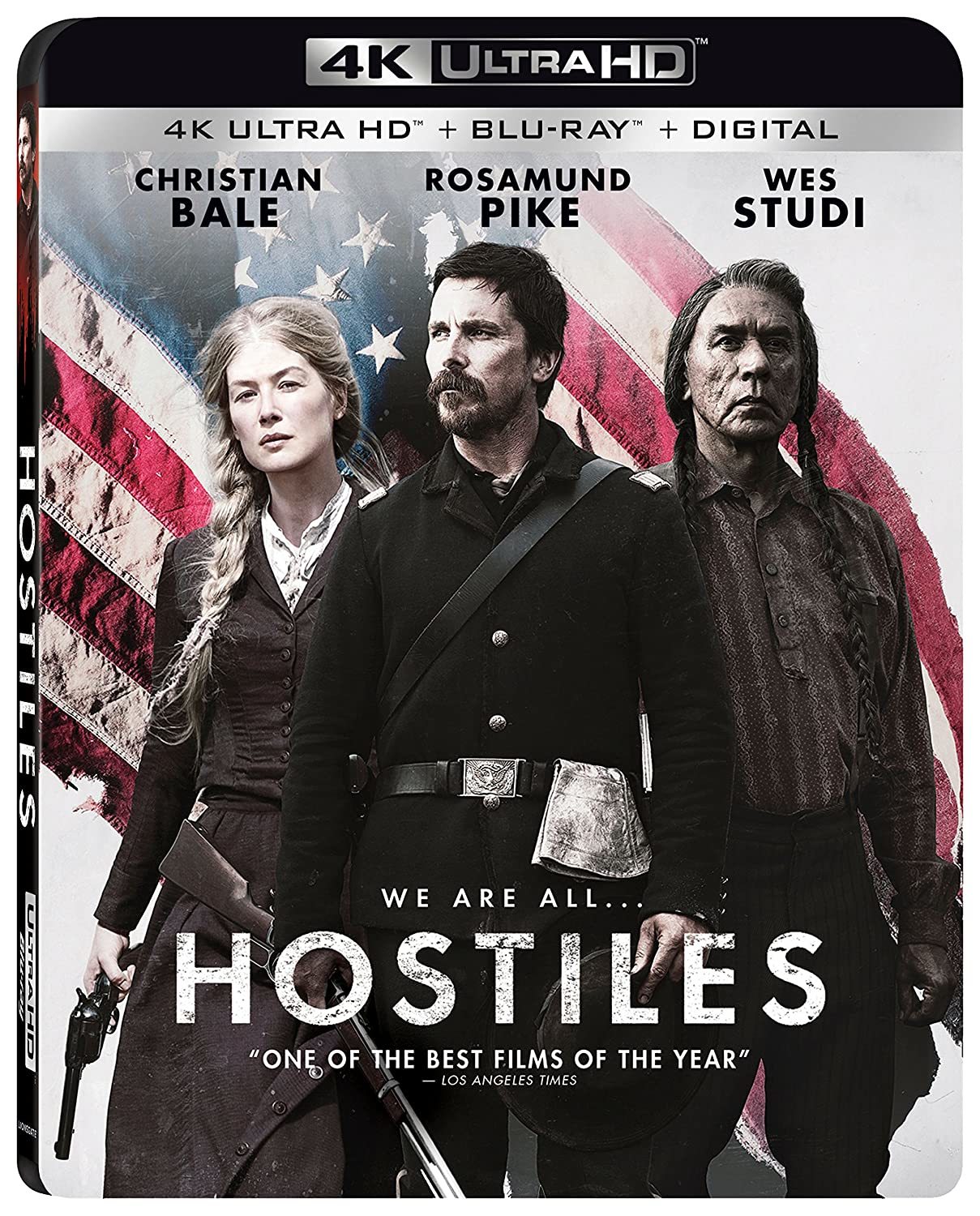 Hostiles is presented on 4K UHD courtesy of Lionsgate Films with a 2160p transfer in 2.39:1. I must confess I was a little trepidatious as I popped this disc in my player, since I haven't always had the best reaction to what I would term Lionsgate's "grain management" on their 4K UHD releases. While things aren't perfect here in my estimation, they're manifestly better than some other Lionsgate 4K UHD releases I've reviewed. Grain still looks slightly artificial to me throughout this presentation, especially against brighter backgrounds (watch, for example, toward the top of the frame in the opening sequence when blue skies are prevalent, and there's a slight tendency toward swarms of black dots that just don't look organic to my eyes). Interestingly, later in the film (starting with the stopover at the fort, where Rosalee briefly considers staying), things look better, though when the story moves to Montana, there is more of the same ever so slightly noisy look to the grain when lighter backgrounds prevail. Again interestingly, the forest scene featuring a lot of mist and fog, as well as the torrential rain sequence, offer no problems whatsoever in terms of resolution. Other than this perhaps niggling grain appearance anomaly, the 4K version of Hostiles is a real stunner in terms of detail levels and palette saturation. I frankly didn't notice a whale of a lot of difference in tonal qualities courtesy of HDR, but there is more suffused look throughout this presentation which includes everything from the frightening red painted face of a Comanche warrior to the dusty blues of the soldiers' outfits to some of the gorgeous hues that are present in scenes featuring sunsets. Fine detail on elements like the pattern on Yellow Hawk's shirt also look more precise in this version. Some of the grading does feature some new richness, particularly some of the yellow tinged scenes like the introductory chat between Blocker and Metz in a candlelit barracks.

This 4K UHD version features the same excellent DTS-HD Master Audio 5.1 track described in our Hostiles Blu-ray review. Some audiophiles may wish that Lionsgate had upgraded the audio to either Dolby Atmos or DTS:X, but the "standard" surround track does offer excellent immersion and fidelity, as I discuss in the linked review.