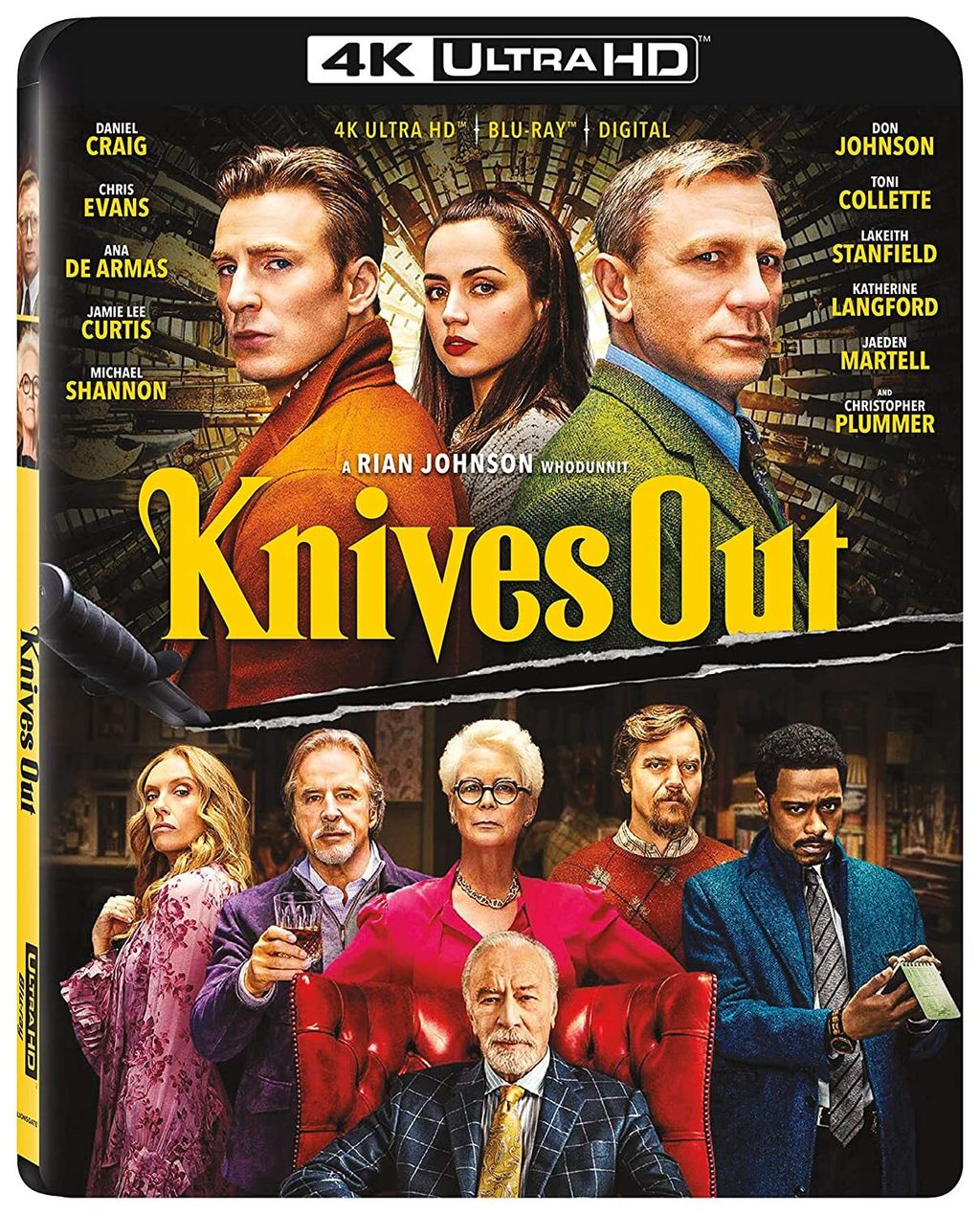 Knives Out is presented in 4K UHD courtesy of Lionsgate Films with a 2160p transfer in 1.85:1. As I mentioned in our Knives Out Blu-ray review, the IMDb reports this was captured with Arri Alexas and finished at a 2K DI, though as I also mentioned in our 1080p review, the imagery has evidently been tweaked with digital grain to resemble film (sharp eyed credits perusers will note a Fotokem logo during the final roll, but I believe that refers to the color grading, as evidenced by an earlier credit). A lot of the time, things resolve really well throughout this presentation, but a couple of moments struck me as artificial and near noisy looking. The first of these is the very opening shot, where the skies above the Thrombey mansion look like they're filled with an insect invasion, but later (and somewhat recurrently vis a vis shots of faces in particular) in the close-up of Marta getting the phone call from Walt to return to the mansion, while detail on facial (and especially forehead) pores is excellent, there's also a little "swarm" of black dots covering her face. Otherwise, though, this is a really great looking presentation that has clear upticks in fine detail that are especially noticeable in things like the sweaters, scarves and gloves that some characters wear (the first meeting between Marta and Meg outside of the mansion is one example), but also with regard to things like the ornately patterned wallpapers or paisley bedclothes inside the Thrombey mansion. Dolby Vision has added a slew of really nice looking highlights and deep saturations to this presentation. I was repeatedly struck with some of the blues, but there are "little" moments, like a scene with Blanc and the police on a sunporch where the bricks behind Blanc almost burst with a red-orange tone that isn't as noticeable in the 1080p version. Other elements, like Linda's dress in her first interview, look slightly more pink in this version. The increase in shadow detail is somewhat more variable. Selected moments, like the scene with Richard in Harlan's office attempting to retrieve an incriminating letter about some marital dalliances, can show more detail in the nooks and crannies of the frame, but other moments, like the climactic scene in the abandoned laundromat with Marta, don't really show a huge uptick in detail.

Perhaps just a little surprisingly, at least given the fact that this film doesn't offer a ton of opportunity for (literally) over the top sound design elements, Knives Out features a Dolby Atmos track. The Atmos channels are sporadically engaged, typically for ambient environmental effects, but in two notable instances to clearly document some overhead "thumps" that are clues as the story progresses. Otherwise, surround activity is quite enjoyable, especially in the many outdoor scenes. Dialogue and score are presented cleanly and clearly, and I noticed no issues whatsoever with regard to distortion, dropouts or other damage.