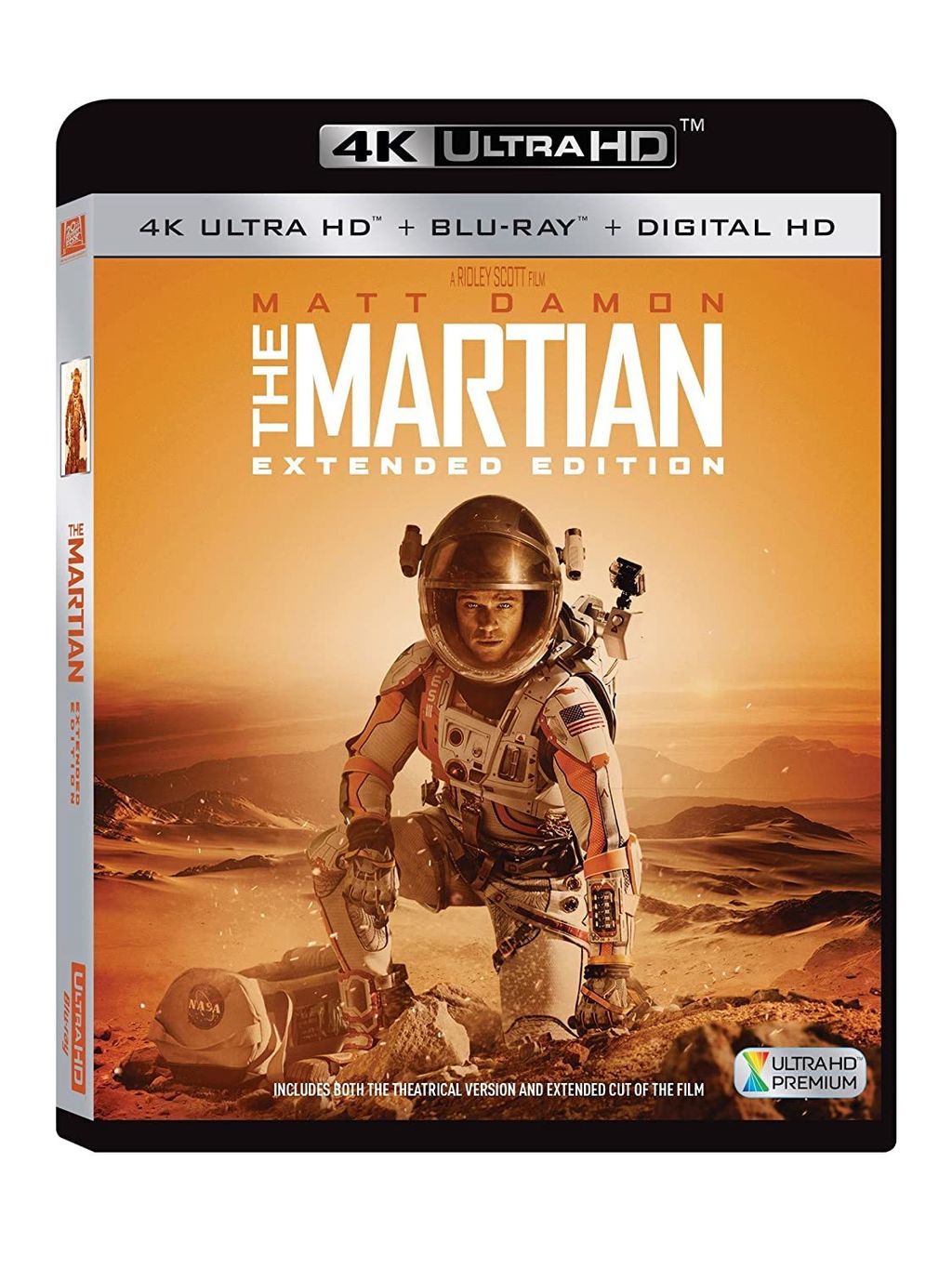 The Martian 4K, arguably the premier title in 20th Century Fox's first wave of UHD Blu-ray releases (releasing alongside Exodus: Gods and Kings, Wild, Fantastic 4, Hitman: Agent 47, Kingsman: The Secret Service, The Maze Runner, The Maze Runner: The Scorch Trials, Life of Pi, and X-Men: Days of Future Past), was photographed in 5K but finished on a 2K digital intermediate, which means it's been down-scaled from its source resolution in post production. What does that mean for its 4K release? It's been upscaled back to 4K, which is still a lower resolution than its native 5K source. What does that mean in the real world, where what's on the screen matters more than technical specs, letters, and numbers? It means The Martian looks fantastic as-is, even if it's 5K downgraded to 2K masquerading as 4K. Yet the results are truly spectacular, not perfect by any means but a noticeable upgrade from the 1080p Blu-ray, which is also included with this release (note that the 1080p 3D version is not included, and don't look for a UHD 3D version, either. It doesn't exist, and neither will any 3D UHD discs).

How awesome is Fox's 2160p presentation? Terrain has always been a good indicator of a transfer's ability to resolve the finest details, and this is certainly no exception. Martian rock formations are ultra-sharp and highly detailed even at some distance. Sandy Martian terrain looks amazing, whether lengthy overhead shots that show the rover's tracks streaking across the otherwise unblemished surface or in extreme close-ups where the finest grains are visible. Flatter vistas look incredible. Obvious definition extends well into the screen's furthest reaches, and clarity is so strong that such shots nearly pass for 3D. Even as there's not much variation and everything is colored with, essentially, the same shade of Martian red, there's a distinguishable definition that's superior to what is an already strong 1080p Blu-ray presentation. UHD is going to quickly redefine what excellent picture quality looks like.

Of course, the movie is more than just red rocks and dust. Skin textures are amazing. Watney's self-surgery scene showcases incredible skin definition: lines have obvious depth, intimate pore definition abounds, and sweat beads are practically tactile. Chiwetel Ejiofor's beard, Jessica Chastain's freckles, and Sean Bean's wrinkles present with superior detail. Such often look downright pasty on the 1080p Blu-ray in comparison. Perhaps the movie's picture quality star is the Ares III spacesuit. The fine fabric details and fibers stand apart. Lettering is razor-sharp. Shoulder pads and the chest plate showcase amazing wear, particularly later in the movie where it looks a little less plastic and more rugged, worn around the edges, and covered in red terrain stains. Computer screen readouts reveal ultra-sharp text and graphics, a noticeable uptick from the 1080p version, even on basic typeface. Even in the hab or on the spacecraft, where textures are smoother and more refined, there's no mistaking the UHD's ability to finely resolve intricate textural nuance on every surface. Even the movie's opening star field appears much more dense in 4K.

Color is another critical factor that's seen a serious boost with the movie's UHD debut. The Martian is a movie dominated by reds and oranges on the Martian surface, whites and blues in the habitat and on the spacecraft, and more diverse colors on Earth. Almost immediately noticeable is how much more full and dense colors appear. HDR brings a new level of pop, nuance, accuracy, and depth to the palette. Martian red is extraordinarily rich and subtly diverse between terrain and rock formations. The Ares III spacesuits offer variations of orange accents, a brighter shade running down the sleeves and a darker orange on the righthand side of the chest piece. Both present with significant vitality and vibrance and a much greater sense of visible pop compared to the Blu-ray. The same may be said of the country flags on the sleeves. The crew's bright blue undershirts are also standouts, offering a fuller richness than the comparatively pale and significantly less nuanced blue color seen on the 1080p Blu-ray. White balance is fantastic, all of the off-white (cream, light gray) shades in the hab and the spacecraft look magnificent, and black levels reveal quality depth, though appear mildly pale in a few instances.

The UHD transfer does reveal a fair bit of source noise that's more pronounced on the UHD transfer than it is on the 1080p Blu-ray. Watch a sequence in chapter 18 that features Watney writing to his crew. Source noise is at about its most conspicuous here and, on an A-B comparison, it's much more evident on the UHD end. Further, extremely light -- trace -- edge enhancement is visible along some sharper rock formations on Mars' surface. At normal viewing distance, it's not a severe problem unless the TV's sharpness setting is cranked way up (which it shouldn't be). It's actually a tad more obvious on the 1080p side. As for other common maladies, such as banding, macroblocking, and aliasing, none make a noticeable appearance.

As for the all-important numerical score, that's a tough call. The movie looks fantastic. Truly, it's a pleasure to watch and the difference between the UHD Blu-ray and 1080p Blu-ray are obvious, even on "blind" A-B comparisons where someone else switches inputs (or leaves them the same), skips around the movie, and only the eyes are left to judge what's on the screen. That said, there are some imperfections evident, and there's also really not much basis for comparison out there yet. There's no native 4K DI content and nothing shot on film and sourced from a 4K DI in this first wave, either of which might have offered a more dependable baseline, though certainly it would seem UHD discs sourced from movies finished at 2K may dominate for some time. The picture quality is certainly upper tier. Both a 4.0 and a 4.5 could be easily defendable, and a 4.25 is probably closer to how I really feel. That said, final grade: 4.5.

Both The Martian and The Martian 4K Blu-ray review featured fantastic sounding DTS-HD Master Audio 7.1 mixes, but that excellence has only been upgraded (with an emphasis on up due to those overhead speakers) with the new Atmos mix on this 4K UHD disc. Right off the bat, even in the relatively "quiet" opening moments with long pans across the Martian landscape, there's clearly more sonic information wafting overhead, but the first real test of the Atmos speakers comes in the devastating storm sequence, where a veritable whirlwind of activity helps to elevate an already exciting experience. The Atmos elements regularly inform both the interior moments in the Hab as well as (especially) some of the outdoor sequences, where even the sounds of Martian breezes are more clearly above and around the listener. There's still more clear overhead positioning in the big climactic sequence, where the careening flight into outer space provides a wealth of immersive activity. Fidelity is crystal clear throughout this thrilling presentation, with booming LFE helping to provide a counterweight to the new "higher" elements.