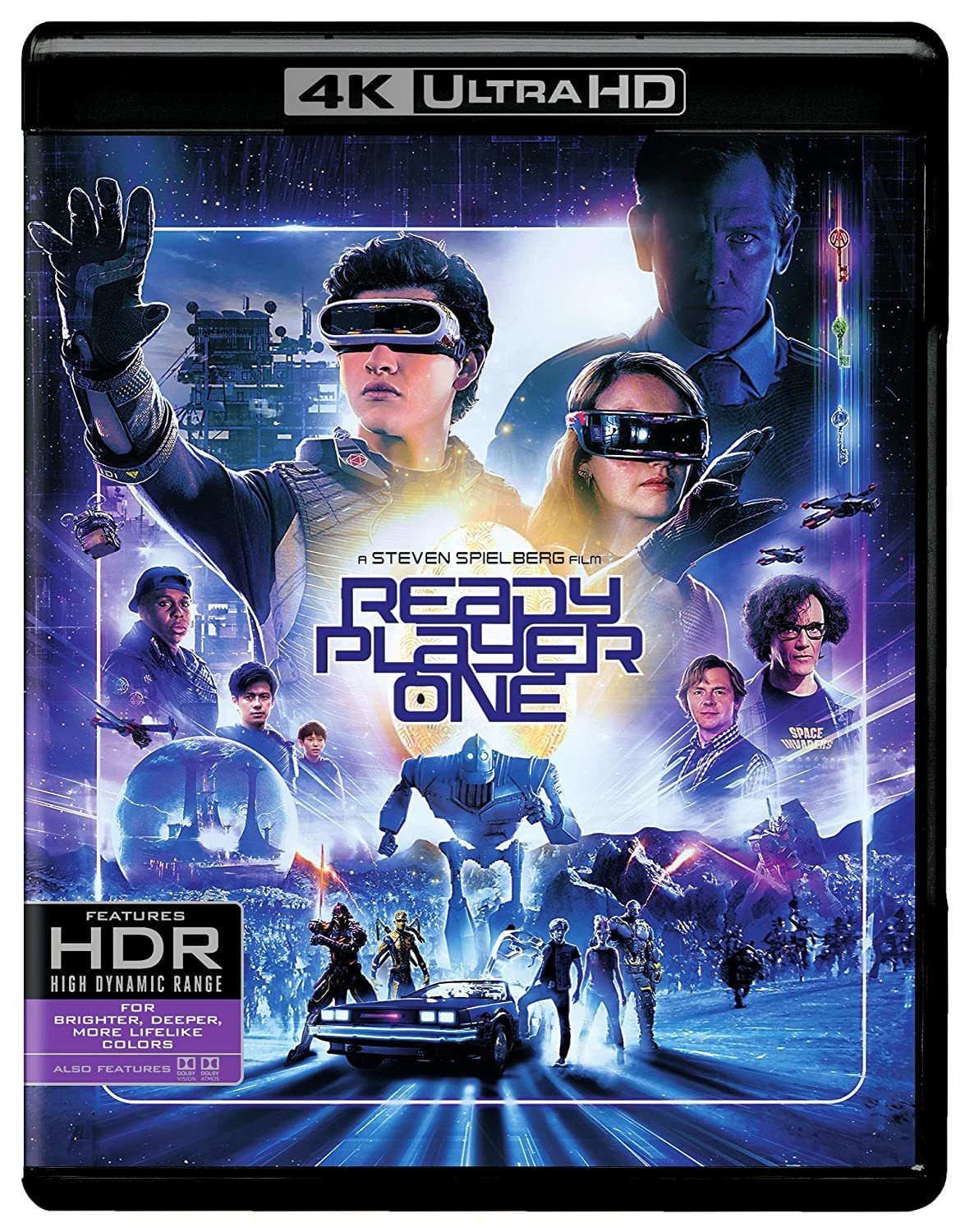 Ready Player One's 4K UHD/Dolby Vision-enhanced presentation delivers a modest, but at times critical and intimate, improvement over a very visually rewarding and top-end Blu-ray release. The film was reportedly shot digitally at 2.8K with its live-action scenes captured on film, but it appears the entire film was finished at 2K. The UHD's improvements are just as often more subtle than they are striking, with special attention paid to the overall clarity of more intimate close-ups both in the real and digital worlds and the upgrade to coloring throughout. The live action segments reveal a gorgeous, often breathtaking grain structure. It's more pronounced on the UHD, not significantly, but noticeably. The presentation is very refined and the UHD brings an even greater cinematic flavor to the live action segments over the Blu-ray, which is itself very effective in that regard but not quite to the level of cinema screen excellence as seen here. Most film-based shots, scenes, and sequences find more accessible intimacy, a more stable, true-to-source clarity that allows for modest textural gains both in the form of up-close shots as well as environmental essentials, such as some of the more run-down areas of Columbus, and the trailer park in particular, both interiors and exteriors alike. The digital world enjoys an increase in clarity, textural tightness, and sheen. Take a look at a Parzival close-up at the 26-minute mark as he prepares to test a new theory to win the race and earn the first key. The grid-like pattern on his face takes on a more tangible and substantial clarity and texturing, appearing more raised and prominent on the UHD. Viewers will note similar enhancements to clarity of presentation and visibility of complex elements throughout the OASIS segments.

The previously referenced shot is also a good example of the 12-bit Dolby Vision coloring's improvements to the SDR Blu-ray. The skin is brighter but more naturally refined, the blue eyes are more intense, and shadow details through the edges are greatly improved. The Dolby Vision coloring does not alter the movie's appearance but it does add a distinguishing stability and vitality that even the impressive Blu-ray cannot match, finding a new gear for color intensity and saturation in most every scene, whether presenting intense OASIS colors with more brilliance or refining the gray, downtrodden hues in the real world. Sorrento's avatar holds an intensely illuminated globe at the 32:33 mark, for example, which appears much brighter and more blinding on the UHD but without washing out the scene or overpowering even near-source details, like a pair of digital character faces. Look at a streaky lens flare at the 34:43 mark. The color intensity is higher; the pinks and purples leap off the screen but, again, don't interfere with the shot's focal point, a good, basic, head-and-shoulders shot of Wade which is also a good example of the UHD's improved, but not drastically so, textural integrity over the Blu-ray. Blacks are more intense but never approach crush, white levels are refined and bright, and skin tones are spot-on in the real world, at least as they reflect the often dour lighting conditions. Technical flaws are essentially nonexistent. Eagle-eyed viewers may spot the rare flub, such as aliasing on a far-distant building in the film's opening shot, but such are very few and far between. This is a top-class UHD that may not offer a massive improvement over the Blu-ray but that does present the film with appreciable refinement. This is easily the best way to watch the movie for home consumption.

Ready Player One features a mostly rousing Dolby Atmos soundtrack. The chaotic action intricacies and nuanced environmental details come to life with precision presentation. The track opens significantly, taking full advantage of the prodigious number of channels at its disposal, overhead included, in its numerous action scenes where distinctive, familiar sounds and those newly created for the film alike compete within the listening area but always present with top-flight distinction, even through chaos. Certainly some are more pronounced than others as focal points shift about but even in din there's a healthy clarity to most every sound a prominent and balance to the most intensive, stage-saturating activity. The one drawback is bass that is sometimes more muted than one would expect. An explosion in a key moment in chapter six, for example, lacks the sort of punch and intensity the scene deserves to really punctuate the devastation, while a significant battle sequence in chapter ten features a fair bit off oomph but still falls short of the sort of aggressive posturing the chaos should command. However, a major wave through the listening area in chapter 11, about 110 minutes into the movie, does find substantial depth, so the effect is not entirely widespread. Chaos reigns as the vehicle race to find the keys begins, as cars and trucks blow over and through and into one another, as motorcycles zip and zoom and weave, and choreographed sonic chaos reigns through the entire stage. Surround and top-layer activity flow generously in most every scene, whether drones buzzing about, gunfire ripping around, or supportive ambience drawing the listener into the film. Music is likewise sturdy and enjoyable, particularly as various 80s tunes dance into the listening area with impressive clarity and stage saturation. Dialogue is well pronounced, clear, and effectively prioritized and positioned in the front-center and occasional examples of reverberation are balanced and true.