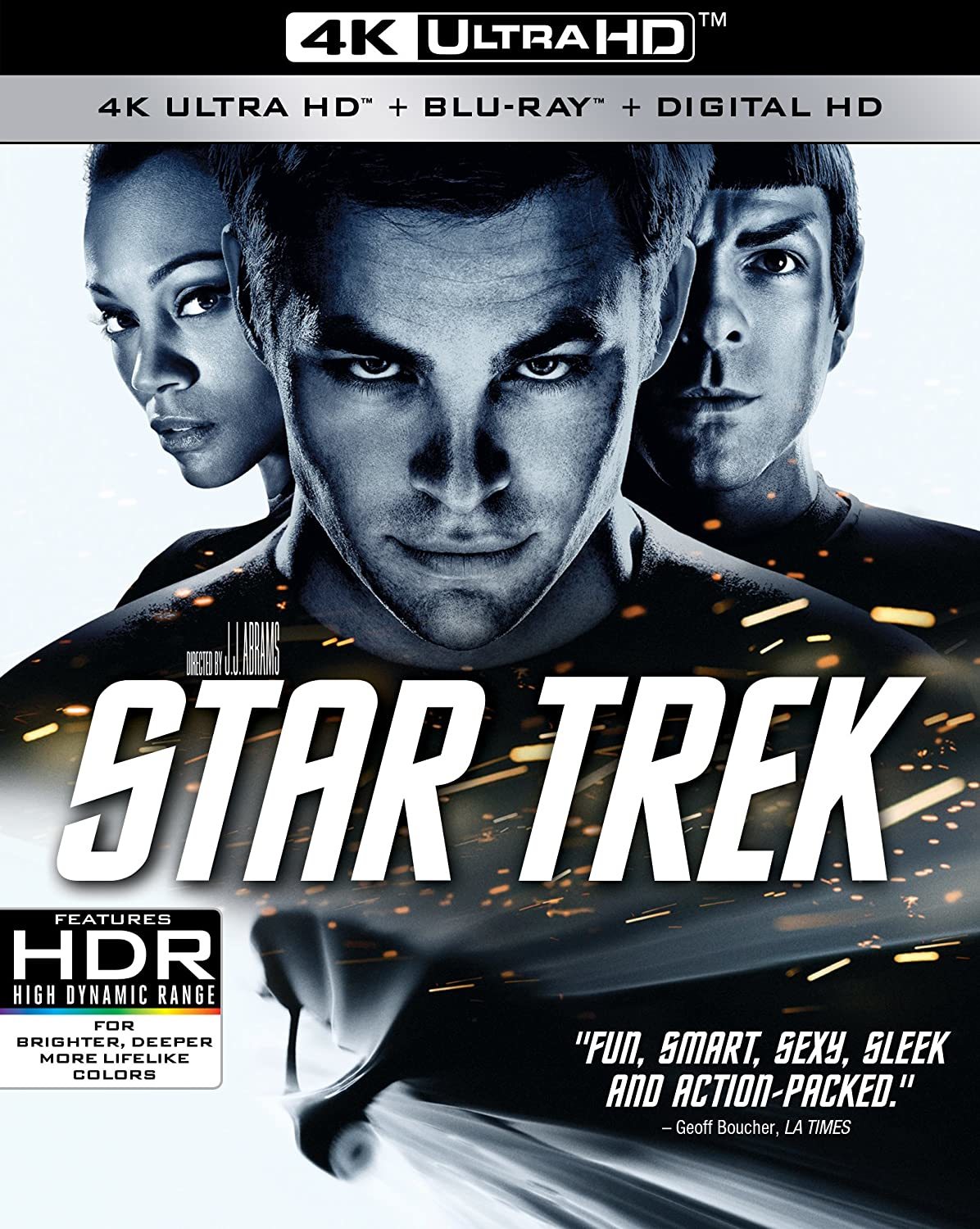 Paramount makes the jump up to speed with its UHD debut, and it's a fitting one at that. 2009's Star Trek revitalized a beloved franchise and it's a slick, fun, very well made, and perfectly complimentary entry into the expanding Trek canon. There's also a new film on the way, all reasons why Paramount couldn't get this, and Star Trek Into Darkness, out the door fast enough. The studio's debut UHD/HDR 2160p disc doesn't disappoint. The presentation improves upon the movie's excellent, though slightly aged (is it really going on seven years since the movie's Blu-ray debut? Time truly does fly at warp speed) 1080p transfer. The UHD release retains a gorgeous cinematic texturing, boasting a refined and complimentary grain structure that accentuates every detail and visual effect. The image is otherwise clean and sharp, beyond a few soft shots that remain (Spock at film's end being the most obvious example). Skin textures are remarkable. Close-ups are so intimately complex as to astound; whether Romulan tattoos or fine pores and facial hair, any viewer would be hard-pressed to find a home video image -- 1080p or 2160p -- that can match this one's level of revealing intimacy. Clothing fabrics, whether civilian garb, the more complex and mesh-y Starfleet uniform tops, or the more rugged (and darkly colored) Romulan attire are beautifully complex. The many industrial interiors have plenty to reveal, from the murky and messy Romulan vessel interiors to the beer plant Star Fleet engineering areas, and the transfer never fails to find the smallest scuff or structural nuance. HDR-enhanced colors are vivid and alive, particularly as complimentary pops against the Enterprise's brightly white interior set pieces. The red, blue, and mustard-colored Starfleet uniforms offer plenty of punch, while any number of complimentary shades, like a red sports car or a green alien's skin, impress. Black levels are tight and flesh tones refined. Direct comparisons with the previous release produce a tangible increase in fine grain structure and presentation, enhanced details -- particularly faces and those Starfleet uniform fabrics -- and a more refined color palette that favors a more neutral presentation rather than a slightly more punchy flair.

Star Trek warps onto Blu-ray with an excellent, but not quite wholly satisfying, Dolby Atmos (Dolby TrueHD 7.1 core) track that adds overhead channels to the traditional configuration. The previous release's Dolby TrueHD 5.1 track was a standard-bearer of its time. The added back surround channels add quite a bit of room for expansion, maneuverability, and fullness to the track. Raw sound detail is exquisite, from the hum of the ship to background ambience at a bar, from pitch battles to supportive bleeps and bloops heard from consoles scattered all around the bridge. Indeed, the track frequently transforms the listening area into the Enterprise bridge. The listener can pinpoint sound location with ease along the traditional two dimensional sound field. Music is likewise organic in its placement. Clarity is remarkable as Michael Giacchino's score saturates the stage with perfect execution. Action scenes are revealing. Whether pulsing phaser blasts, heavier torpedo launches, or the general mayhem of battle and all that entails the track never falters in delivering a realistic, immersive experience. Except overhead. Beyond a couple of fair overhead moments, such as when a shuttlecraft flies above when the cadets are being assigned to their ships, there's not much in the way of obvious and discrete top layer detailing. There's clearly some subtly interwoven and organic support details during battle scenes, but the lack of a fuller height presence is a bit disappointing, particularly when the track is practically screaming for it, such as when the elder Spock mind melds with Kirk and his voice scatters all over the listening area. Otherwise, the track is exquisite in execution and detail, including refined and natural dialogue that's always perfectly prioritized and center placed, beyond the few moments of natural extension beyond. The 4.5 audio score is more reflective of the Atmos track's inability to more richly and fully utilize the overheads, but the track is otherwise stellar.